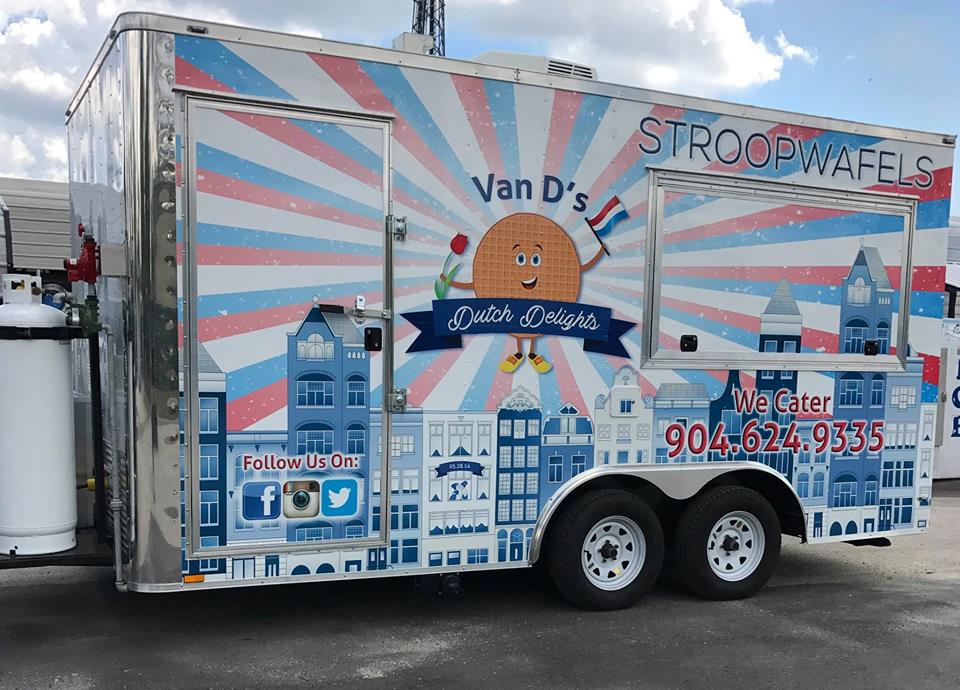 Got a craving for warm and delicious stroopwafel? If you live in the Jacksonville area finding freshly baked Dutch inspired deserts can be nearly impossible. Fortunately in 2016, Van D’s Dutch Delights entered the scene to fill the void and quickly become a staple of the Jacksonville food truck community. Since starting their mobile food business Van D’s isn’t just serving up one-of-a-kind deserts, but has introduced countless locals to a whole new food group that many didn’t even know existed.
Take for example the stroopwafel, a Dutch word that translates to “syrup waffle” in English.  The stroopwafel is a staple of the Van D’s Dutch Delights menu and can best be described by this writer as two super thin waffles put together with syrup in the middle. Another accurate description is just plain old delicious and although many in the United States have never tried it, the treat is extremely popular desert in the Netherlands.
Of course, Van D’s Dutch Delights has taken it’s own spin on this traditional desert by serving amped up variations of this classic by adding chocolate, strawberry, caramel or cinnamon. View photos of a sample of their tasty treats below.

Stroopwafel’s and other tasty treats from Van D’s Dutch Delights.

The Abridged History of the Stroopwafel
Although the exact date the stroopwafel was first invented is debated (most reports state the late 18th century or early 19th century), the desert hails from Gouda, a municipality in South Holland that was founded in the middle ages. Today, it is reported that there are four active factories in Gouda  that continue to produce the stroopwafel for mass consumption.
As the story goes a baker by the name of Gerard Kamphuisen was looking for ways to reduce waste and created the stroopwafel with excess dough. Gerard’s creation would quickly go on to become a local favorite and eventually a traditional desert.

If you live in the Jacksonville area, you can find out where Van D’s will be heading next by visiting their Events page on Facebook. You can regularly find them at popular food truck destinations such as the Jax Food Truck Court or catch them early next month at the Fleming Island Plantation.
In addition stroopwafels, Van D’s also serves hot chocolate, Dutch coffee, malts and ice cream. The Dutch coffee or hot chocolate in particular are an excellent compliment to a stroopwafel. Bonus Tip: A common way to enjoy this desert is to place it over a cup of hot coco or coffee to help warm the desert and melt the syrup.
M&R Specialty Trailers and Trucks, located just outside of Jacksonville, FL, is proud to have built this one-of-a-kind desert trailer. The external wrap was completed by the fine folks at MediaWorks Graphic (recently acquired by Dimension Design) in Jacksonville.