What is a Roach Coach? Where Did the Term Come From?

Before the rise of gourmet food trucks there was the “roach coach.” In fact, a small number of people (generally over the age of 60) still refer to mobile food units by the name roach coach. Fortunately, over the past 20 years the perception of the quality of food that can be served from a truck has been completely transformed and flipped on its head thanks to the innovative chefs that operate food trucks in the 21st century. In today’s post, we discuss how that name came to be and dive into the history of the food truck so you understand where this term came from.

What is a Roach Coach?

The term roach coach was used to describe white and grey food trucks that frequented construction and other worksites during the 70s and 80s. These vehicles got their name by due to their questionable sanitation practices. These vehicles would serve basic convenience food that you would be familiar seeing at a gas station or convenience store. Basic hot dogs, bags of chips, pre-made sandwiches and burgers were the expected fair at these mobile establishments. Although it seems almost incomprehensible now, some trucks would even sell packs of cigarettes from the serving window.
If you were to eat at one of these roach coaches, sometimes called snack trucks, it was purely out of convenience. Construction sites are often located in parts of the city where there is not access to other eating alternatives. If you didn’t bring your lunch in a pail, you literally had no dining alternatives.
You will still find food trucks actively serving blue and white collar workers at different job sites or corporate parks, but the term roach coach is a thing of the past. While getting the appropriate health and licensing requirements may have been less stringent in the past, the process of starting a food truck isn’t much different than starting a restaurant from a health perspective. All food trucks are expected to operate and maintain clean kitchens at the same level you would expect any other food establishment to operate. In most cities, food trucks will undergo numerous inspections throughout the year by government employees to ensure health requirements are maintained.

Most of the food trucks you see on the road today are state-of-the-art rolling restaurants. They have efficient and clean kitchen layouts, dynamic logos, mouthwatering menu options with the goal of winning you over as a longterm repeat customer and fan. The goal of the roach coach is simpler and much more transactional. Serve food in places where there aren’t other options available. There’s no goal to gain a repeat customer or advocate for the business.
The lack of branding on these roach-coach style food trucks is the most obvious differentiators. The image featured below is a classic example of the old school type of mobile food unit. This plain gray style of vehicle would have been extremely common site to see at construction sites 20 – 30 years ago. You can still find trucks like this on the road today and you shouldn’t be concerned for your health when eating at these mobile established.  Although they aren’t branded in the same way as gourmet trucks, they must adhere to all of the same health code requirements to legally operate. 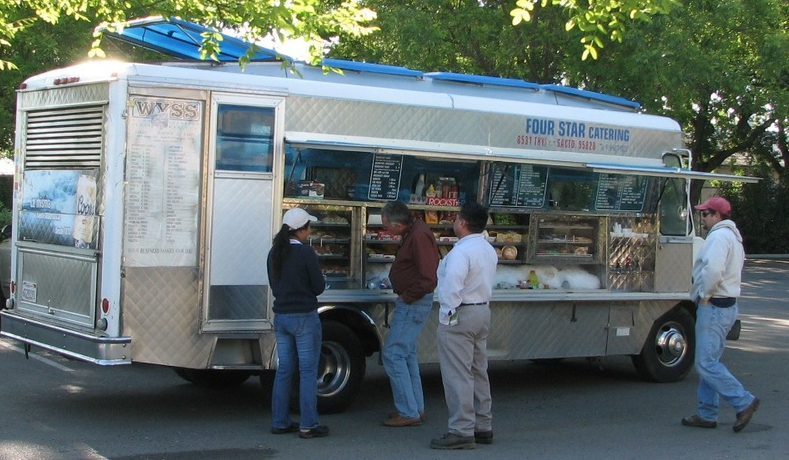 This is what a “roach coach” typically looks like.

A Bite of Food Truck History

You can think of the roach coach as a time period of the larger mobile food industry that got it’s beginnings back in the Wild West. In the mid-1800s the original chuck wagon became popular feeding hungry cowboys out on the open plains.
As mobile refrigeration became an option, mobile food made enormous leaps forward and the variety of food that could be safely served in a mobile setting increased. Before refrigeration,  salted or smoked meats were the only kind of protein that could travel.
In the 1950s, mobile canteens like the one shown below were authorized by the United States Military. These canteen’s became a familiar site offering enlisted men hot meals in bases around the country.

Mobile canteen’s like this were used by the U.S. Army in the 1950s.

As you can see, people’s perceptions of what mobile food is has continued to evolve over the past 50 years. Although we can’t predict with certainty what the future of mobile vending will look like in the next 50 years, we are confident it won’t look the same as it does today.
developer2019-11-27T16:00:05+00:00June 1st, 2017|Getting Started|0 Comments