Lung cancer screening units are facilities that carry out a known and trusted test to check those who have a moderate to high risk of acquiring lung cancer. Due to the screening test’s ability to detect lung cancer before any symptoms appear, it can be detectable early on when it is simpler to treat and frequently curable. Lung cancer may already be spreading when a person first has symptoms.

What Equipment Can Be Installed On A Mobile Lung Cancer Screening Unit? 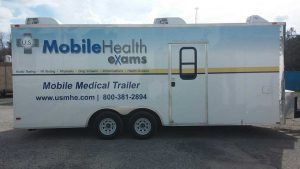 1. Computed Tomography (CT) scanner – With the help of x-rays, a CT scan, like the Samsung NeuroLogica BodyTom, can create precise cross-sectional scans of a body. In contrast to a traditional x-ray, which only captures one or two images, a CT scan collects numerous images, which are later combined by a computer to produce a slice of the body portion being examined.

2. CT-Guided Needle – A CT scan may be used to direct a biopsy needle into a suspected cancerous location that is deep within the body so that a sample of tissue can be taken to be examined for malignancy.

3. Chest X-Ray – A chest x-ray is frequently the initial examination your doctor will perform to check for abnormal lung tissue. Your doctor can request more testing if anything abnormal is found.

4. Positron Emission Tomography (PET) scanner – A blood injection of FDG, a mildly radioactive type of sugar that primarily accumulates in cancer cells, is used in PET scans. A unique scanner that can perform both tasks simultaneously is frequently used to combine a PET scan with a CT scan. The doctor can furthermore evaluate the CT scan’s more comprehensive image with the PET scan’s areas of greater radioactivity. Patients with lung cancer most frequently undergo this kind of PET scan.

5. Magnetic Resonance Imaging (MRI) scanner – MRI scanners produce a high-resolution image of the body’s soft tissues, much like CT scans do. However, MRI scanners substitute radio waves and powerful magnets for x-rays. The most frequent application of MRI scans is to check for potential lung cancer metastasis to the spinal cord or the brain.

6. Gamma Camera – A gamma camera, also known as a scintillation camera or an Anger camera, is a tool used in the scintigraphy process to picture radioisotopes that generate gamma radiation. Its uses are related to the utilization of bone scans with PET scanners. If a malignancy has progressed to the bones, a bone scan can assist to detect this. However, since PET scans can frequently detect whether cancer has migrated to the bones, this test is not frequently required.

What Communities Can Be Reached With A Mobile Lung Screening Unit?

These underserved groups include uninsured individuals who are smokers which fall under the low-income and geographically isolated communities. But it’s not only smokers that can be impacted by lung cancer as is an unfair stereotype. There are certain trades that are more likely to contract lung cancer by working in refineries, shipbuilders, or other manufacturing jobs.

These patients are most likely to develop lung cancer that is incurable and untreatable. However, due to transportation challenges or the lack of insurance that will pay the expense, just 1% of them have access to CT scanning. Providing free lung cancer screening to these uninsured individuals would help them detect lung cancer in its early stages and possibly help them lower the cost of care and even save their lives.

Lung cancer treatment costs can be greatly decreased via mobile screening. Late-stage lung cancer is a common presenting complaint for uninsured individuals in this group at the emergency room. When that happens, a patient’s life is only slightly prolonged by treatment, which might cost over $2 million.

The cost of treating many of these people with surgery and radiation for lung cancer is often less than $100,000 when lung cancer is detected sooner. According to a study, another advantage of the mobile strategy was the fact that 66% of patients who were examined in the mobile lung cancer screening units returned for a second annual scan. This suggests that the majority of patients were very pleased with their whole experience and were aware of the value of screening. 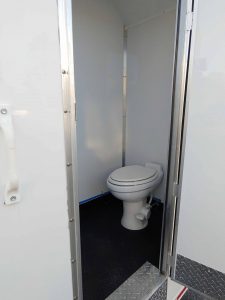 Bath rooms can be installed in mobile health units.

Low-dose CT (LDCT) scans have been utilized recently in individuals with a higher risk of developing lung cancer (mainly because they smoke or used to smoke). Finding anomalous lung tissue that may be cancerous can be assisted by LDCT scans. According to research, annual LDCT scans to detect those with a higher risk of lung cancer can save lives compared to chest x-rays.

Lung cancer ranks as the second most frequent cancer in the US. Moreover, it is the main reason for cancer-related fatalities. The likelihood of a successful treatment is higher if lung cancer is discovered early when it is still tiny and has not spread.

The main advantage of screening is a lower probability of developing lung cancer, which is the leading cause of death in smokers and ex-smokers. But it’s vital to be mindful that, like with any test, not everyone who is examined will benefit. The use of LDCT for screening does not guarantee the detection of all lung cancers or the early detection of all those that are identified, and some screening-detected cases of lung cancer will still result in death.

Learn About Issues Besides Cancer

The results of LDCT scans can also reveal conditions that require further testing to determine their exact nature even though they turn out not to be cancer. One might require more CT scans or fewer invasive procedures like a lung biopsy, during which a portion of lung tissue is surgically removed or with a needle, depending on your medical history. Rarely, these tests could cause significant problems.

The heart can be imaged using low-dose CT screening. As a result, one possible advantage may be its capacity to measure the degree of coronary artery calcium and the risk for significant adverse cardiac events among heavy smokers. Based on screening lung LDCT, the data seem to support the feasibility of such modeling. Biospecimens have been obtained for several studies, including the NLST, and a relationship between the markers in the biospecimens and the LDCT could potentially be useful.

In terms of how screening affects smokers’ behavior, research from the past and present and outcomes modeling have focused on the “educational opportunity” presented by conveying a scan result, whether it is negative or inconclusive. During one study, 1 year after LDCT screening, 14 percent of smokers reported quitting (two times the expected rate for the general populace), whereas, in another study, cessation rates rose from 20% to 24%, 28%, and 42%, respectively, depending on whether smokers got 0, 1, 2, or 3 anomalous scan reports across a three – year period.

What Other Procedures Can You Do In A Mobile Lung Cancer Screening Unit?

The true diagnosis of lung cancer is determined by examining lung cells in the lab, despite the fact that symptoms and the outcomes of specific tests may clearly imply that a person has it. The cells can be extracted using a needle or operation from a suspected location, lung discharges (the mucus you cough up from the lungs), fluid collected from the area surrounding the lung, or lung secretions (biopsy). The circumstance will determine which procedure(s) to use.

During bronchoscopy, the doctor can frequently take biopsies of any tumors or obstructions they uncover in the patient’s bigger pulmonary airways.

In order to collect a little sample from an ambiguous location, doctors frequently utilize a hollow needle (mass). Since no surgical incision is necessary, needle biopsies have this advantage. The disadvantage is that they only take a tiny quantity of tissue, and in some situations, this amount may not be sufficient to make a prognosis and to perform additional tests on the cancerous cells which can assist doctors in selecting anticancer medications.

To determine if it contains cancer cells, a sample of sputum, or the mucus that patients cough up from their lungs, is examined in a laboratory. Obtaining early morning specimens for three consecutive days is the most effective strategy for this. This examination has a higher chance of detecting lung malignancies, including certain squamous cell lung cancers, which develop in the main airways of the lungs. Identifying other kinds of lung cancer may not be as beneficial with it. Even if there are no cancer cells in the sputum, more testing may still be done if the doctor suspects that a patient has lung cancer.

Cells and minute pieces of tissue are removed (aspirated) by the doctor using a syringe and a hollow, extremely thin needle. The lymph nodes in between the lungs could be examined with an FNA biopsy to look for malignancy.

Doctors can drain some of the fluid from pleural effusions surrounding the lungs to determine whether the fluid is the result of cancer spreading to the lining of the lungs (pleura). Other illnesses, such as cardiovascular disease or an infection, may also be to blame for the buildup.

In order to do a thoracentesis, the skin is numbed before a hollow needle is placed in between ribs to extract the fluid. The fluid is examined for cancer cells in the lab. A malignant (cancerous) pleural effusion can occasionally be distinguished from one which is not by performing additional fluid testing.

The biopsy needle can be inserted through the skin on the chest wall when the presumed tumor is in the outer portion of the lungs. A local anesthetic can be used to anesthetize the spot where the needle will be put first. The doctor then maneuvers the needle through the region while using a CT scan or fluoroscopy, which is similar to an x-ray, to view the lungs.

Air leakage from the lung at the biopsy site and into the gap between the lung and the chest wall is a potential side effect of this treatment. A pneumothorax is a medical term for this. It may lead to breathing difficulties and the collapse of a portion of the lung.

One or more tiny tissue cores are removed with the use of a bigger needle. Since core biopsies produce larger samples than FNA biopsies do, they are frequently recommended.