How to Start a Food Truck in Atlanta, GA

One of the bastions of the southeast and southern BBQ, and practically connected by the hip to neighbor Florida, Georgia is no stranger to the sweep of food truck fever. We’ve already discussed the trials and battle that the city of Savannah has and is still going through to create their own society and band of successful truck, read about it Here. Contrary to that, however, the capital of Atlanta is thriving, practically overcrowded with over 60 trucks currently in their roster. It’s safe to say that, like its fellow big cities across the border in Florida, the region has settled into a dense and lively street food community.
If you’re looking to get into a city that has fully set up and run through the beginning stages of food truck incursion, a place where events are rolling rather often and the regulations, though maybe not the most ideal, have run through the original confusion periods, than Atlanta may be just for you. But beware, for this also means it can be that much harder to work yourself in as one of the surviving cornerstones amongst the crowd; it may have developed into a family, but there are still a lot of trucks to compete with. Not to mention, considering they’ve hit their stride, the speed of change for any habits and regulations that aren’t ideal are going to be much slower, if not at all; meaning one has to go in expecting to deal with the annoyances from now until, well, ever.
In order to thus survive, you’ll need a better idea of what playing field you’ll be rolling into, and the best way of course is to start asking other trucks. We’ll start it out for you of course; in fact, we were lucky enough to be able to grab an interview with the practically legendary Atlanta cornerstone truck, Nana G’s Chicken and Waffles. Owner and operator, Guy, generously donated some of his time to discuss his home turf for us.

Question: Why don’t you start off by telling us about you and the truck, what’s your story?
Guy: My name is Guy, I’m 45, was in the clothing business for 25 years, one thing led to another, men and women changed the way they were buying clothes for themselves when the recession hit seven years ago, and ended up losing everything. And then one day had some buddies at my house in Miami, watching the Food Network, saw these food trucks and that was kinda when the craze was starting, went looking around Miami saw there were some down there, then ended up flying out to LA to research and see what the craze was about. While I was doing that, my mom started taking care of my grandmother, who’s 104 today, and she found a box of recipes, which is kind of a coincidence as we were already out researching and trying to define who we are. So we started experimenting with recipes, thought about opening the truck, and then one thing led to another, had a party at my house with 65 people, taste testing some of my grandmother’s recipes, took a secret ballot, and Chicken and Waffles was the favorite. A week later I bought a truck, wrapped it, and here we are 3 ½ years later we are one of the hottest food trucks probably in the southeast I think.
Q: From what you know, how did Atlanta become and grow into the Food Truck-filled city that it is today?
Guy: Well I think Atlanta, over the last probably 5 years, has really become a true Food, Restaurant-kinda connasieur city you could say in a nutshell. Some of the best restaurants that I’ve been to in this country are here now, and I’ve traveled all over the US being in the clothing business. But I think every city is changing now because we’re all becoming foodies now, we’ve all become bored with the average tv show on the cable channel, and the Food Network and Travel Channel has really opened doors to things about food that I don’t think people have ever really thought about.
And that’s given an opportunity with the food truck, to give an entrepreneur like myself to take a chance on something. Instead of having a million dollars to open up a restaurant, for $40,000 you can go out to get a food truck and try and create a name and a niche for you. That’s what we’ve done, and we brought in 2 trucks now, have 3 franchises on the table, we’ve been on 2 TV Shows (US of Bacon and Deep Fried Champion), and are getting ready to film on another show coming in March-April.

Q: Have there been any groups that have popped up to help the local truck owners in starting out, surviving, and banding together? Are there any other resources you have used or would suggest other new owners to look into? 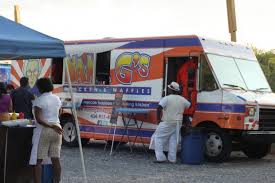 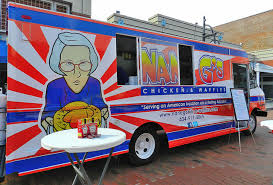 Q: Events are always a driving force for any truck’s survival, what is Atlanta’s event and festival scene like? Are there any accessible rallies happening frequently?
Guy: We have one here called a Food Truck Park, a friend of mine owns it, and we need more of these in Atlanta. In order for these trucks to survive, they need a destination to go. And the reason for that is because people enjoy the food trucks, and that’s why, going back to your question on how important it is to survival, I mean you HAVE to do it. Come summer I’m at a festival every weekend, whatever it is, wherever somebody’s putting together a venue that’s where you need to be. With the laws changing and making you have only 2 locations, you’re allowed to go vend on private party whenever you want, just got to be able to have an event to go out so you don’t get in trouble. The beer festivals seem to be leading the nation in the amount of festivals per day that’s happening, we have a beer festival happening somewhere in this state every weekend, and they always have anywhere from 3-5 trucks. So it’s vital for someone to be in the festival business.
Q: To end off, is there any last thing you’d like to say to new owners looking to make Atlanta their mobile business home?
Guy: If you’re choosing Atlanta, it’s due diligence, you have to make sure you dot your i’s and cross your t’s, because like I said there’s 60 trucks here and it’s competition. If you don’t have a concept, and this is why I think we’re successful is because my research on trucks I found the ones that had success were the ones that had the THEME behind the food truck. The trucks that aren’t surviving are the one where ‘Billy’s got a lot of money, Billy opens a cool thing, hires a chef, has a weird name and sorta weird ingredients,’ it’s kind of hard to market all that. You have to have a staple dish, and my opinion from my research, is you come up with one thing and that’s what you do. We’re Chicken and Waffles, we don’t sell hamburgers, that’s not who we are.
If you’re going to spend this money, make sure you do the right homework, cuz just like restaurants the food trucks are going out of business every day. So make sure that if Atlanta’s your home make sure you do the right thing, or maybe go somewhere where there’s not 60 trucks, cuz the last thing we need is another hot dog or Mexican fajita business.

The Food Movement – a young Atlanta company who’s business is intertwined with and focuses on trying to help build the truck movement.
Street Food Rules and Regulations – a list of links for Atlanta and Georgia
2014 Atlanta Food Truck Packet – official information on things likes zones, guidelines, permits and other things you need to know
With the end of that almost highly discouraging interview, haha, we wish you luck on your foray into the food truck mess hall that is Atlanta. A big thanks goes out to Guy for sitting down with us for so long to do this interview, it was certainly a blast having you here to guide us through the ins-and-outs of the place! We hope that if anything our efforts today can provide at least a little bit of help and direction to anyone starting off their mobile business in Georgia’s capital. Don’t forget to send some food our way!